Return of the Tentacle

Return of the Tentacle

Because I guess most of you are Adventure-gamers, I want to make a small announcement here about our Project, I hope thats okay

The Project "Return of the Tentacle" is still in development, we're making great progress, and we hope that we can release a great video very soon, and a greater demo soon

Team is still the same, working hard getting everything done in the right dott-way

We have some great Artists, including Marvin "purpur" Hribsek and Simon "10tacleboy" Thomaschke . It's a pleasure to see how lovely the original Mansion locations have been redone in 1024x768. Also the never-seen-before-brand-new locations are looking great

Then there's David "Absynth:[Dave]" Schornsheim, who made great work re-interpreting some of the original Music Score. He also makes Story, Dialogues and Puzzle Design.

I simply do scripts, always trying to keep the look & feel of the original Game. (Yes, there's a verb interface

I joined the Project in the End of 2010, and I think I can say were working very hard on it, and the Project is growing from day to day

There'll be *at least* english and german languages available.

Or donate some stuff

Return of the Tentacle Project Page on Apeiron Studios

.... some other Stuff at the Homepage of the Project:

I noticed that you are using the WME engine... Could you tell us if it's running using the WME Lite engine, or if the full Wintermute is require?

Just to make things clear: we may have a GSoC task this year about adding WME Lite support to ScummVM, so your announcement is *really* coming at the best moment

Actually full WME is needed for RotT to work. Reasons are simple:

1. WME Lite does not support any Video Playback.

2. WME Lite does not support PlugIns. But I developed one I need, which is aMUSE ( ya know

, to have some Music effects that WME cannot do by itself.

. If you need a WME Lite Game for testing, you should contact the Developer of Five Magical Amulets. The Game is available for purchase on the AppStore.

Spellbreaker wrote:1. WME Lite does not support any Video Playback.

There's no shortage of WME Lite games, just obviously there are going to be users asking for support of your game in ScummVM, and it would be nice to have it. Oh well.

So, if you really get Video Playback running on WME Lite, I would absolutely port the game to WME Lite. ( e.g. 1024x768 resolution, and dropping some music effects due to the wme amuse plugin).
Top

We already have a thread on this created by the author of the game himself.

Actually I am the author of the game

But i did not know that the other guy, who actually is the GFX Artist, already created a thread. Maybe I should have used the search function first

Spellbreaker wrote:Actually I am the author of the game

But i did not know that the other guy, who actually is the GFX Artist, already created a thread. Maybe I should have used the search function first

You're awesome by the way.

Lol what's going on here, that came a bit too early for April Fool.


Spellbreaker wrote:Actually I am the author of the game

Since when do you have taken over the project? That's news to me.

You're the (presumptuous) programmer and Dave and I, as the project leaders, admitted you in our team.
Top

Looks really impressive and a very faithful style used. Personally I would have ditched the old fashioned text interactive controls such as open, pick-up etc but otherwise a very thoughtful and faithful take

Has LucasArts given permission for this, I only ask as I would hate it to be stopped as it's released otherwise?

Thank you very much!

Well, we never asked for it and we're not even in contact with them, so in that way there's no official permission.
But there are lots of unofficial LA-games and they never complained about it.
Top

Hi I'm the guy doing the wintermute-port for ScummVM as GSoC this summer.


Spellbreaker wrote:So, if you really get Video Playback running on WME Lite, I would absolutely port the game to WME Lite. ( e.g. 1024x768 resolution, and dropping some music effects due to the wme amuse plugin).

Given the current progress, I'm quite sure that movie-playback will be integrated along with the rest of the engine, perhaps even some more of the removed features from Wintermute.

Now, plugins as plugins are not doable for ScummVM, as ScummVM is supposed to be quite portable. BUT, that doesn't mean the end, I can always integrate whatever plugins people have used into the engine in some way, as long as I can get the source code for the plugin (and that source code released under GPLv2).

I don't really know if there are other roadblocks for compatibility, as I haven't tested a wide range of games against WME Lite yet (nor compared them to WME full). The only other one I can come up with, is using system fonts, those won't be available on most platforms ScummVM runs on, so your game should preferably contain it's own fonts in the data files.
Top

I got a bit bored yesterday, while looking into some rendering errors, so...

Well, you can keep your videos: 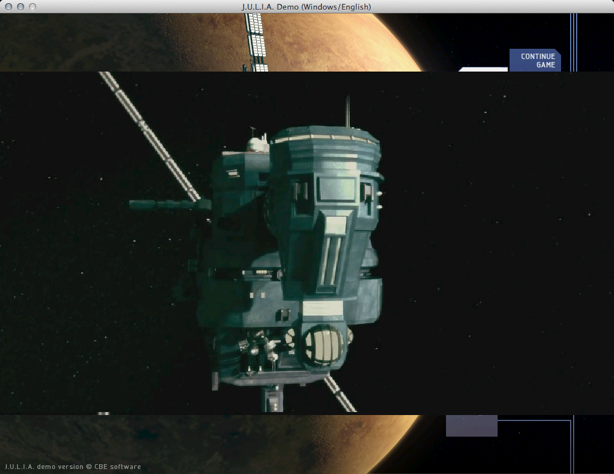 That's the intro video from the J.U.L.I.A.-demo playing inside ScummVM, Theora-support is now working, atleast for FMVs, I haven't gotten around to testing them for Entity-objects yet, although the code is there.

Do note that this is still a WIP-screenshot, the video doesn't blank the lines around it (and I haven't had time to see how it's supposed to look).

Another thing I learned from starting up J.U.L.I.A. was that the particle system still seems to work, with no additional effort from my side.

That should leave sprite mirroring (which I have code for, but no test case for yet, if anyone knows of one, please tell), rotation and aMuse for RotT to be compatible. (well, there's still a lot of work left with the basic stuff in the engine too, but the feature set is getting closer to what you need atleast).
Top

WOW, thanks for the info.
I'm really looking forward to that.