Subforum for discussion and help with ScummVM's Dreamcast port

Now that the DC 'detecting games' routine is changed, it is a bit easier to do some tests, to check which games work and which doesn't, also compared to the previous releases;
apart the very annoying double disc change, using the ScummVM just as a boot disc

i have just tested a couple of great Scumm games until now, checking if it's possible to play the entire intro without skip, and play a bit in the game itself;
btw, i'll update this list, with a couple of tests also for the other engines

- Indiana Jones and the fate of Atlantis (PC) - ok

- Indiana Jones and the fate of Atlantis (FM Towns) - slow, unplayable (unlike in past, apart some minor gfx and music bugs)

- Loom (PC CD) - the only way to play this one on the DC, is to use the ScummVM engine just as a boot disc, and then switch with the original PC CD game. If you try to rip the big audio file in .mp3, the music and speech will play badly (out of video synch, and sometime wrong speechline cuts)

- Monkey Island 2 (FM Towns) - slow, unplayable (unlike in past, apart some gfx and music bugs)

- Monkey Island 2 (MAC) - crash error at boot, it does not work (unlike in past)

---
so, all the FM Towns versions are strangely running bad now, Monkey Island 2 MAC does not work anymore;
i already knew about Full Throttle and The Dig issues, btw The Dig seems doing little improvements (fixed an old subtitles crash bug in the intro)
---

- Simon the Sorcerer (PC CD) - ok, but the music (differently than speech and sfx) sound worse than in past

- Myst (PC CD) - ok, but the image is still shifted to the left, not centered on screen

- Riven (PC CD) - ok, same Myst issue but not as bad; i would like the engine to allow disc swap with the original 5 cd's, instead of check for all the files at boot

- Discworld 2 (PC CD) - crash error on boot (not enough memory to buffer FMV); compressing everything, it was somewhat just runnable in past, but not stable at all

- Gobliins 2 (PC CD) - ok; it use original CDDA, but the intro is mute (no CDDA music, no speech); all fine ingame instead

- Broken Sword (PC) - ok; to reduce the audio stuttering is better turn off something, like the background music, or the speech (and enable the subtitles ofc)

- Broken Sword 2 (PC) - the Dreamcast resets playing the intro (when Nico and George arrive to the house);
this is probaly due to the fact that the laser cannot be in two places at the same time (the intro load music and speech from two different big files); turning off the speech, you can avoid the crash and play the game a bit, but after the first sequence (out of the first room) the DC resets again. This game require an old ScummDC release (less memory) to be played a bit more
Last edited by kremiso on Sat Oct 30, 2021 3:08 pm, edited 4 times in total.
Top

kremiso wrote: ↑Wed Oct 27, 2021 9:14 am so, all the FM Towns versions are strangely running bad now, Monkey Island 2 MAC does not work anymore;

The only thing I can think of is that the FM Towns games use smooth scrolling now, but I don't know if they do it by default here. (With the the Linux version of ScummVM, I can use the Edit game dialog to turn off smooth scrolling on the Engine tab.) I have no idea about Monkey Island 2 MAC.
Top

eriktorbjorn wrote: ↑Wed Oct 27, 2021 10:15 amThe only thing I can think of is that the FM Towns games use smooth scrolling now, but I don't know if they do it by default here. (With the the Linux version of ScummVM, I can use the Edit game dialog to turn off smooth scrolling on the Engine tab.) I have no idea about Monkey Island 2 MAC.

there is nothing on the DC main menu about that, i would like to check something via scummvm.ini file, but sadly seems no more available, due the new detect method, but i could be wrong 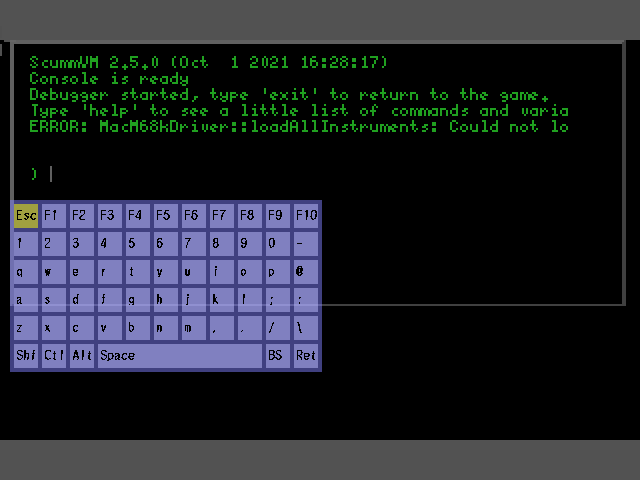 The full Monkey Island 2 error message should be either "Could not load "iMUSE Setups"" (if that file is completely missing) or "Could not load default instrument" (if the file was there, but something went wrong when loading the instruments).

("iMUSE Setups" is the file where the Macintosh version stores the musical instruments that it uses instead of MIDI hardware.)
Top

thank you, i presume the second one
wondering if i need to convert the audio files now, unlike in past
i'll try something

is a bit of shame that the error messages are truncated on DC, like the one i posted about
Eye of the Beholder Sega CD :
viewtopic.php?p=96218#p96218
i have some chances to know which file the engine is searching for?
Top
Post Reply
5 posts • Page 1 of 1