It has been almost a year since the last release of ScummVM. We have made a truly tremendous number of changes, which you can read about in the NEWS.md file. We need your help to test this version!

Besides the list of games to test before the release, the most notable things to test are:
For running the games you will need the latest stable build of ScummVM. Then, load up some games and report issues in the issue tracker and playthrough progress on this forum post so we could keep track of the progress on the Wiki.
Top

Perfect! my AGS games work! just a little slow with games at 900x600 resolution.
I can't play to the end because of the slowness.

But it feels like playing the old amiga 500 games. They were slow

Started a playthrough of The Journeyman Project 2: Buried in Time (the first time I've played it in nearly 15 years!). I used the 24-bit Windows version from my CDs, which ScummVM identified as version 1.00. So far, things are going smoothly. I watched all the TV in my apartment, rescued Arthur, took quick visits to Chateau Gaillard and Chichen Itza, and have made my way through most of Da Vinci's era. Also died a couple of times, both unintentionally (getting hit by a cannonball in Chateau Gaillard) and intentionally (walking down Chichen Itza to the people below). I saved and loaded a number of games and had no issues there.

The music was drowning out some of the voices in certain spots so I tried adjusting the volume settings. Since there are no in-game controls, I used ScummVM's volume settings, and found out that none of them work except for the Mute All command. I filed #12877 for that.

Not sure if this was an issue in the original game, but I found that if you use the number keys for navigation, you can "queue up" multiple movement commands. Ran into this in the apartment where I pressed 5 (forward) a couple of times, then got to where I wanted to go and hit 3 (left). However, I kept going forward, then 30-45 seconds later stopped moving forward and turned lefts. Probably wasted a good 30-45 seconds drunkenly stumbling around because I went further than I expected to. Since you can't do this with a mouse because the movement arrows are grayed out, I feel like it should only register an input when you are at a node. But since this is maybe how the original game behaved, I'm not sure if I should file a bug report.

One other matter: the first time I tried to save, there was a console log that had something to do with not being able to load timestamps. But I didn't get the message and never saw it again in the future. Since I don't have the log message text any more, I didn't think it was good to file a bug report.


The initial 1.0 release of Buried in Time included a notable glitch near the end of the game that prevented the player from getting a perfect score.

I assume that this has been fixed in ScummVM and I won't encounter this with my playthrough with 1.0?
Top

I was able to complete the US version of Private Eye without any issues. This was on Mac OS X (Intel x64). As I understand it, there are 49 different endings to the game, including some early deaths. This is based on the standard or alternate plot you choose at the beginning, choices during the game, and random chance at the very end of the game. I was able to test an early death and also one of the "good" endings.

...and the GUI looks great in high resolution!
Top

I completed The Journeyman Project 2: Buried in Time on Adventure mode. It was a "longplay" where I was trying to experience everything. The only "showstopper" issue is that the player doesn't get any Research points for three particular actions, which make a perfect score impossible to achieve. I filed #12881, and I'm pleased to see that a PR has already been submitted (although I haven't tested it).

I also found that HUD messages weren't getting cleared. At first, I thought it was the intended behavior, but when I started checking with the original game (via the GOG release), I found they got cleared when you changed locations. This doesn't seem to hinder completion, it's just a very obvious difference in behavior between ScummVM and the original. I filed #12887.

I discovered some other issues and filed bugs for them, but they are all relatively minor and some players might not encounter them. Two I discovered were also bugs in the original engine. I don't expect those to get fixed any time soon, but it would be nice to have them fixed at some point in the future.
Top

Thunderforge wrote: ↑Fri Sep 03, 2021 4:12 am I also found that HUD messages weren't getting cleared. At first, I thought it was the intended behavior, but when I started checking with the original game (via the GOG release), I found they got cleared when you changed locations. This doesn't seem to hinder completion, it's just a very obvious difference in behavior between ScummVM and the original. I filed #12887.

I've submitted a pull request about the HUD message not being cleared (it's so nice when the code at least documents what it's trying to do), but I have no idea about the rest of the bug reports so someone else will have to look at those. I know almost as little about the game engine as I do about the game itself.
Top

I completed the Steam version of A Golden Wake (AGS) on MacOS x64 using the 2.3.0pre stable build.

I opened a ticket on pathfinding, but it does not impact the playability of the game. I also ran into a conflict with the autosave, but I think that was because I was going back and forth between the GUI save/load and the in-game one. I think I overwrote the autosave using the in-game save (I believe this has been documented here and fixed already.)

100% completable. It's great to play these AGS games in ScummVM. It was a nice surprise to see the achievements show up also. Thanks for all the work getting this new engine added!
Top

I played through Nightlong: Union City Conspiracy (Windows/English) without any major issues, aside from some of the annoying pixel hunting.

The gameplay was great and the cutscene playback was smooth.

I opened a new ticket on some odd behavior when using the GUI save vs. the in-game save - 12902
I reopened a ticket on a frozen character after a cutscene - 12624
And I ran into an already open ticket - 12637

Edit: If needed for documentation, I'm using macosx-x86_64-stable-b8d6afb0 on MacOS 10.15.7 Catalina. This is the same for my previous two posts.
Top

Tested Resonance (GOG version) on Scummvm pre-stable build. Game is playable from start to finish. The only isssues I found were scaler-related, advmame 4x conflicting with rain effects and messing up the resulting image. Will test TLJ with texture mod next as soon as possible.
Top

Finished all of them and every bug I found that needed to be fixed has been fixed. Except for one with Space Quest: Vohaul Strikes Back but that one is low priority and is also a bug with the stand alone AGS version.
Top

I downloaded the latest ScummVM snapshot for Windows and with this build the audio and video is no longerout of sync with Space Quest - Incinerations.

is it just me or is Grim Fandango very slightly cutoff at the bottom? or maybe the text is just slightly too low? I don't remember if this is how the game always was 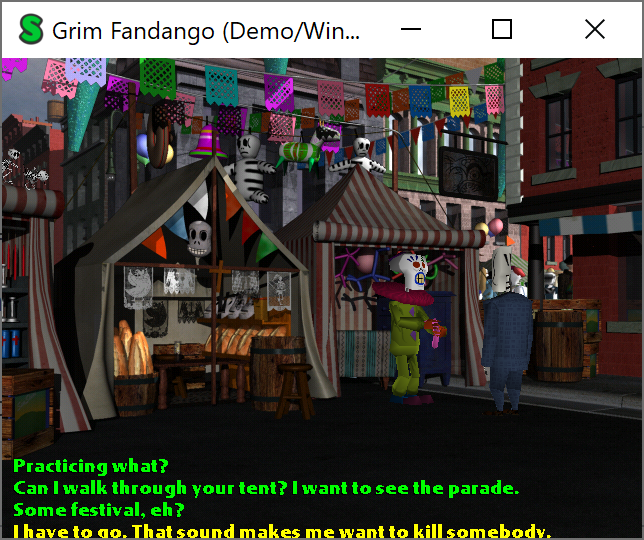 I was able to complete the demo with no issues though

for the full Grim Fandango game, I noticed if I hit F1 go to Save Game and choose a slot, the whole background goes black while I type in the name for the save
Top

Started a test of some AGS games.