Hello there, fellow adventure gamers! Since everyone in this forum loves a good adventure, I wanted to show you the point-and-click adventure we are working on. It's full of charm and puzzles, just like the good games of old.

3 Minutes to Midnight is an adventure game brought to life by Scarecrow Studio—a small, passionate team—and is unlike any you have ever seen before.

Most fans of point-and click-games would assume this is a pretty straightforward adventure game with a beginning and an end. But... what if that wasn't the case? What if every action you took had consequences? What if each puzzle had truly and wildly different solutions? Sounds pretty revolutionary, right?

Follow Betty Anderson and Eliza Barret as they unravel a mystery in their sleepy little New Mexico town. With over 15 hours of gameplay, charismatic art, breathtaking environments, and a colorful cast of characters—each of whom has extensive dialogues and intricate backstories—this game will keep you glued to the screen.

It also boasts droves of items—each with its own customized description and special role—to use in the game’s complex, challenging, and enthralling puzzles.

It's the late 1940s and somewhere, in the middle of nowhere, a loud explosion shatters the night. A plucky teenager wakes up with a jolt. Where is she? WHO is she?

Turns out she is Betty Anderson, and whatever blew up in the desert seems to have wiped her memory clean, but as she’ll soon learn, Betty has a lot more to worry about than amnesia. Like, say, a town full of people who aren’t what they seem, an overly ambitious mayor, a top-secret military base, the mafia, and a potbellied pig with a vendetta. Then there’s this little problem of a doomsday plot counting down to the extinction of the human race… but she'll get to that later.

Join Betty to crack the conspiracy that starts with a bang and ends at 3 Minutes to Midnight—if we’re lucky.

Inspired by such titles as The Secret of Monkey Island, Day of the Tentacle, and Sam & Max Hit the Road—3 Minutes to Midnight combines the point-and-click gameplay and clever humor with high-definition cartoon art, an intuitive interface, and a compelling mystery.

Play as plucky teenager Betty Anderson and the ambitious and diplomatic mayor Eliza Barret—two characters on opposite sides of the spectrum—to unravel a plot much deeper than one would surmise at first glance.


All the characters in the game—as well as the world they live in—have a rich and detailed backstory, with clever and unexpected ties to each other. Scratching the surface won’t be enough to discover more than their apparent identities.


Everyone knows that puzzles can make or break an adventure game. (Cat hair mustaches, anyone?) After all, most of the challenge comes from figuring out solutions to these convoluted problems. What’s worse than puzzles that are too hard or too easy, though? Having to solve the same kind of puzzle over and over until you feel like eating your controller out of frustration.

That’s why we’ve made a special effort to vary the types of puzzles in 3 Minutes to Midnight. You may need to talk to other people in town to figure out an answer—or to get yourself out of a real mess. Some puzzles are progressive, meaning one decision early in the game could dramatically influence how you find answers. The environment may hold clues, but you might also have to rely on your own inherent knowledge.

With over 1000 interactable objects and the largest script in point-and-click history, players will be able to use their creativity to figure out many different solutions. In turn, these decisions can influence the outcome of the game and affect which ending the player sees. When we say this game can be replayed, we’re really not kidding!

We’re talking hidden dialogue, events, and characters that you might otherwise never see. Maybe that character you kept hearing about wasn't actually real. Or maybe he was… and just very well-hidden.
Most of our big puzzles have been designed in such a way that there's sometimes more than just the obvious solution. You might find an easy way to solve a problem, or maybe you'll find a secret that unlocks more information about the backstory of our characters.
When we said replayability, we meant it! The game offers multiple endings, each of them distinct from the others. The endings are drastically different and are determined by how you play the game, giving real stakes to the story. Some finales may be happier than others, so pay attention to your choices! No need to fear “multiple endings” where the only differences are that the ending cinematics have the camera tilted at a weird angle and everything is tinted some random color—we guarantee it. 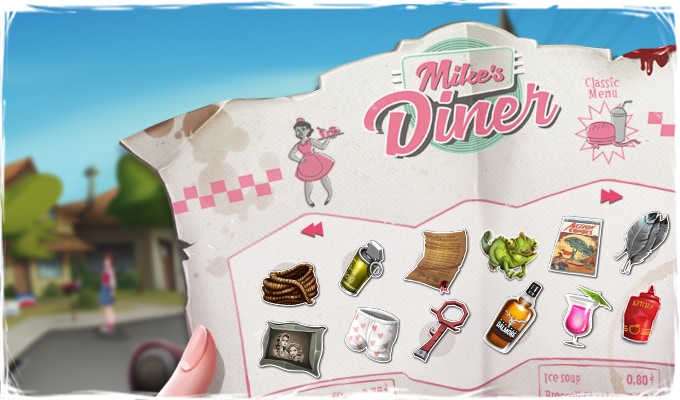 Our built-in hint system will highlight important objects and assist during those tense dialogue options. After all, we wouldn’t want you to get lost (or look for a walkthrough online!) So if you have the need, activate this option... or don't.
“That doesn’t work” is now a thing of the past! No more will you be stuck hearing the same phrase 5000 times in a row, because we made sure to write 5000 lines of unique dialogue specifically for this reason! All of them clever and funny, of course, for you to discover at your leisure.
Wait, what’s this you picked up off the ground? An Easter egg! During Betty’s (mis)adventures, you’ll have the chance to find lots of Easter eggs. They’re not all three-second jokes or random background details, though. We’re talking elaborate hidden gems. Remember what happened to Guybrush if you left him soaking for too long? If you do, you’ll know exactly what we mean. If not, don’t worry—you’ll develop your own set of elaborate in-jokes once you play the game. Like Ben Zinn’s plumbing, humor is wildly creative and slightly dangerous. (See, that’s an in-joke you don’t get... yet.)
Consider yourself genre-savvy? Maybe you watch a lot of movies? Then you’ll definitely enjoy hunting for cleverly hidden references to other great works. They may appear as witty book titles or hard-to-spot cameos, but don’t worry—they won’t be taking center stage. After all, 3 Minutes to Midnight has its own stories to tell.

Yes, we made sure to include at least one Star Wars reference... original trilogy, of course.

We’ve ensured an expansive and interesting gameplay experience. In fact, we might’ve gone a bit overboard. Early testing of the game took about 12 hours! Considering there was no dialogue and that we knew exactly what we were doing… you’d probably think we’re crazy! So, get yourselves ready for 15 to 20 exciting hours of gameplay.

But don’t worry, our game isn't long because it's clunky. We’ve introduced many quality of life improvements. Want to leave a location faster? Double-click the exit! Feeling lost? Use the hint system. Re-entered a dialogue by mistake? Skip it! Then again, maybe you won’t want to.

Have we mentioned that our characters have both expressive faces and bodies? It just makes everything so much more dynamic. Take a look below...

If you're one of those hardcore keyboard & mouse players, you’ll appreciate the amount of work that went into making its controls as smooth as possible. On the other hand, if you swear by a controller, you’ll get to experience the best controls ever developed for a point-and-click game.

All characters are fully integrated with the game’s backgrounds, thanks to shadow and coloring systems specifically designed for this title. Dynamic lighting affects every scene. No character will ever look like a cardboard cutout in a bad Saturday cartoon show.

The game offers multiple solutions to different puzzles, with many, many conditions that lock or unlock certain information or events.

Here’s a bit of gameplay for you to enjoy. The first half of the video is brand-new 4K footage exclusive to our Kickstarter, with voice acting and sound effects not yet implemented. If you want to enjoy our talented voice cast, the second half of the video—which is from a demo shown at worldwide events like Gamescom, PAX East, and E3—will give you a fuller experience. Don’t worry, though, we made sure there are no spoilers. For real, we checked. Several times.

Our game has over 50 characters aside from Betty and Eliza, each with an intriguing backstory, and many of them interconnected. While you unravel the main plot of the game, you’ll learn more about every single one of them—if you want to, that is. Discover hidden dialogues and the special events they lead to. Only the most expert of adventurers will be able to unlock this game in full!

Now, how about we meet some of the townsfolk? 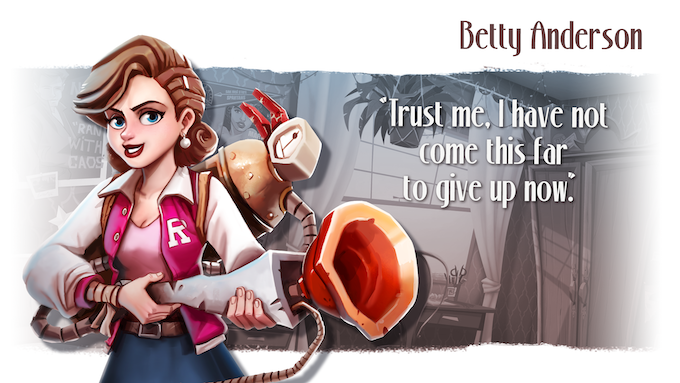 We want to make the best-looking point-and-click adventure game of all time. That’s why we have some of the best artists working on it. Environments look familiar? That might be because our environment artist, David Puerta, worked on such titles like Yesterday, Runaway, and Broken Sword.

We’ve created a huge number of locations for you to explore. All of our backgrounds are painted in 8K resolution and converted to 4K for the final version of the game. Most are panoramic, allowing us to show you beautiful parallax effects and leaving you with even more to discover. But enough explaining, why not take a look?

Some of our environments are even available during both day and night. Gameplay and situations change with the time of day, and so will the people you encounter.

It’s taken us three years to craft 3 Minutes to Midnight’s script. Over FIVE people have worked to make sure the script is rich and engaging, engineered to keep you guessing and on the edge of your seat.

Every item, or combination of items, is accompanied by a humorous comment. Some may be more subtle than others, but we think they’re all good for a laugh. Examine any interactable item for a chuckle… as well as a clue.

That’s why you can trust us when we say every aspect of the game has been treated with the utmost care and respect, and the script is no exception.We value a good story as much as we do our art and our game’s integrity.

Each environment in the game is carefully and uniquely constructed. They’re also animated and update whenever you interact with them! Remove something? Poof, gone! Add something? Poof... in?

If you want to know more... there's more!
Here's our website:
www.scarecrow-studio.com

And we are on Kickstarter until november 8th if you want to give us a hand:
https://www.kickstarter.com/projects/sc ... ref=c5pn5t

Thank you for your time! I hope you'll love our game! Stay awesome!
Top

Very detailed and nice to look at.

Do you use your own custom engine or something already available (Wintermute, AGS)?

Over FIVE people have worked to make sure the script is rich and engaging,

we use Unity, but we created a lot of custom tools inside it to help assemble the game the way we wanted. Wintermute and AGS are okay, but they were very limited for our idea.

Do you use your own custom engine or something already available (Wintermute, AGS)?

Over FIVE people have worked to make sure the script is rich and engaging,

Already backed as it looked and sounded good

Thank you so much!

Glad to see the funding goal was reached