A Very Interesting Discovery in Simon the Sorcerer 1

A Very Interesting Discovery in Simon the Sorcerer 1

So this is all to do with panning, in case you don't know what that means it's when the camera/screen scrolls to show you a different part of the background.

LucasArts/SCUMM games had a Scrolling Pan feature where the player could move their character to the edge of a screen and the camera would incrementally pan. They had this right from Maniac Mansion (think of the camera in kitchen panning to reveal Edna at the fridge).

Sierra struggled to implement this feature into SCI until years and years later but they were able to use Interstitial Pans, where the player can leave a screen then the camera scrolls to the next screen using a 'seamless' pan as a kind of wipe. I suspect this was a function call out to the VGA card, I can't be sure but that might explain why the player is locked out from controlling it beyond just triggering it. They never quite got the presentation right, it always seemed a little bit jerky and just didn't make the most of the background art on display in my opinion - but it was lightyears better than nothing at all. Think of the opening 2 screens of Space Quest IV the ship flys away screen south, then the camera pans south to the screen where the portal spits Roger out.

"This is surprisingly interesting but what does any of it have to do with Simon the Sorcerer?" I hear you ask? Well thank you for sticking with me this far. For years I thought Simon was actually written in SCUMM, like they had a license. As far as I am aware now, this is not correct however. An interesting development between the 1st and 2nd Simon games is that there is no panning at all in Simon 1 but plenty of lovely scrolling pans in Simon 2.

I can prove to you today however, that the code for panning was obviously intended to be used in Simon 1 but the feature had to be abandoned at some point. How can I know this?

The way panning in graphic adventures works is by creating large scale Background Art that the camera can pan across. Sometimes the art is enough to fill several screens.

What I'm hoping to show here (I've never really used imgur before so I hope it works) is that the art for Simon the Sorcerer was created with panning in mind. This is actually 2 screens in the finished game, but they go together seamlessly when snipped and pasted back the way they were meant. This Giant scene even has a 3rd screen, and I think there is a 5/10 pixel column of BG missing between screen 2 & 3 they all clearly fit together. I have in the wider version left the mouse cursors at the screen edge to show you where the screen's edge is. It's genuinely hard to tell. Screen 1 & 2 there can be no mistake.

There are loads of what I would call "dead screens" in Simon 1 where you can move through them but there is nothing to do. It seems much more likely now this is actually a vestigial result of the art having to chopped into multiple screens after the panning feature was lost.

Anyway I'm hoping this is interesting and actually news, I'd hate to find out I'd done all of this and everyone knew this entirely already. What do you all think? Is there some alternate universe where Simon 1 has magnificent scrolling panning? Is this interesting at all? Let me know
Top

Re: A Very Interesting Discovery in Simon the Sorcerer 1

I realized the same thing a few years ago and also found it quite interesting.

I agree that your theory of backgrounds being designed for scrolling may be right, especially considering how perfectly many of these screens match (you can see more here: https://simonthesorcererart.blogspot.com/)

Fun fact: the one of the giant you picked actually goes two more screens to the right. Being so wide, this may also lead to think that the artist just drew wide backgrounds to be chopped into screens instead of the whole panning idea though.

There is even one vertical screen at the gorge. 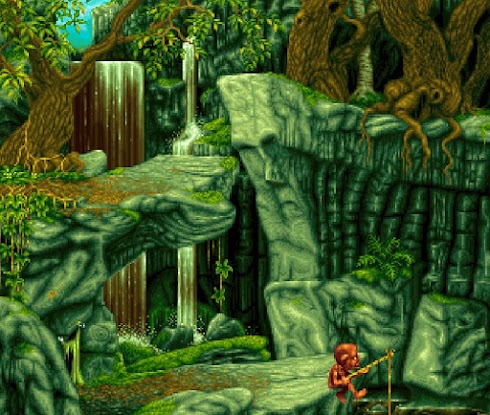 Re: A Very Interesting Discovery in Simon the Sorcerer 1

The background artworks are among the best I've ever seen in a pixel-style adventure game, honestly. It all seems very three-dimensional despite the low resolution. I also love the fact that the artist seemed to like hiding faces all over the place.
Top
Post Reply
3 posts • Page 1 of 1